A man was taken into custody Tuesday following a shooting at a Minnesota health clinic that left five people injured, according to police and sheriff’s officials. The shooting happened Tuesday at the Allina clinic in Buffalo, a city of about 15,000 people roughly 40 miles northwest of Minneapolis.

The condition of the victims is not currently known.

Wright County Sheriff Sean Deringer identified the suspect as 67-year-old Gregory Paul Ulrich, a longtime resident of Buffalo with a history of police contact. Urlich is currently in custody at the Wright County Jail, according to CBS Minnesota. Buffalo Police Chief Pat Budke said he believes Ulrich targeted the facility or someone inside it because he has a history of being unhappy with unspecified health care he had received.

Deringer said police received a 911 call that someone was shooting at the clinic at 10:54 a.m., and responded to what he called a “horrible looking scene.” Helicopter footage showed shattered windows on the front of the building.

Deringer said responders evacuated the injured victims and took the suspect into custody. A suspicious package was found in the corner of the building’s lobby, and Minneapolis Police bomb technicians responded to help investigate.

Deringer said investigators learned that Ulrich had been staying at a Super 8 motel in Buffalo. Officers searched his room and discovered “additional suspicious devices,” and evacuated the motel, Deringer said. He added that the department was in the process of executing additional search warrants.

Budke said investigators are working to retrace the suspect’s last hours prior to the shooting.

“We do believe that Mr. Ulrich did act alone, so a sigh of relief maybe for us in the law enforcement community, and our community as a whole, we’re not looking for any additional suspects,” Deringer said.

Deringer said Ulrich is “no stranger” to law enforcement, and has had a series of run-ins with police dating back to 2003.

Budke became emotional at times during the press conference, describing the small community as a family.

“Our hearts break as a community,” Budke said. “This is a day that no community would want to go through.” 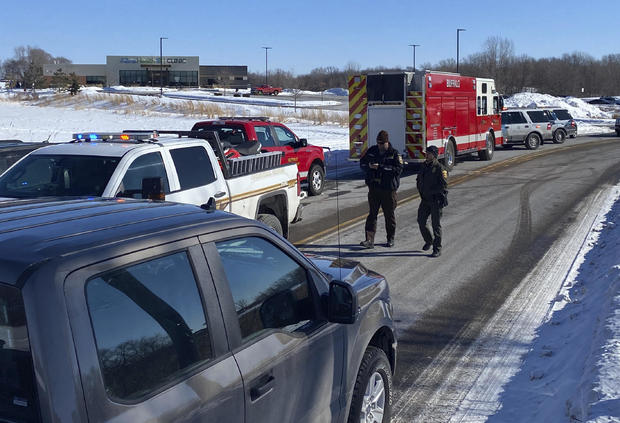 Law enforcement personnel and first responders gather outside of the Allina Health clinic, Tuesday, Feb. 9, 2021, in Buffalo, Minn. Authorities say multiple people were shot at the Minnesota health clinic on Tuesday and someone was taken into custody afterward.  David Joles/Star Tribune via AP

Five people were transported from the clinic with injuries, four to North Memorial Health Hospital and one to Hennepin County Medical Center, said Kelly Spratt, the president of Allina Health Buffalo Hospital. He wouldn’t say whether the victims were at the clinic to receive treatment or were staff members.

The Midwest Medical Examiners Office, which handles cases in Wright County, had no comment on whether it had sent anyone to the scene.

The FBI, the Bureau of Alcohol, Tobacco and Firearms and special agents and crime scene personnel with the Minnesota Bureau of Criminal Apprehension all responded to the shooting.

“There is an unspeakable depravity in doing harm to those who work to heal us,” Minneapolis Mayor Jacob Frey Frey tweeted. 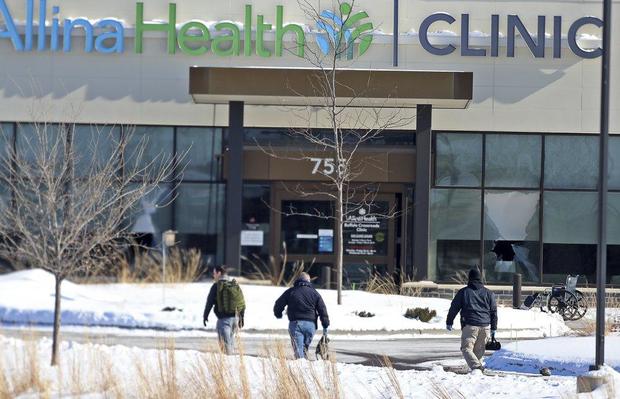 Law enforcement personnel walk toward the Allina Health clinic in Buffalo, Minn. where multiple people were shot Tuesday. Multiple windows on the front of the facility were seen shattered. David Joles/Star Tribune via AP

Congressman Tom Emmer, a Minnesota Republican whose district includes Buffalo, tweeted that he’s praying for the staff and patients at the clinic.

“My staff and I are in contact with Allina’s team and we hope that this horrible situation will come to a quick and peaceful resolution,” Emmer said.