Becoming an Eagle Scout is a rare honor. But they don’t just give it out — a Scout has to earn it. Two years after girls were first allowed into the Boy Scouts, almost 1,000 of them rose to the top rank of Eagle Scout.

CBS News spoke with some of the first young women who can call themselves Eagle Scouts.

“I don’t think any of us really thought this day would come,” said Kendall Jackson. “For me to be a part of that first class and say that I did it, I’m really proud of myself.”

Only 6% of Scouts ever make it to the top. It takes at least 21 merit badges, a large service project and a commitment to leadership. Some of the girls were set on proving that they were just as capable of doing everything that boys could accomplish.

“As a girl, when I stepped up to leadership positions I was often called bossy, which is a terrible thing to tell any young girl who is stepping up and trying to help out a group. Scouting taught me how to be a great leader,” Isabella Tunney said.

For many of these young women, scouting is part of their history.

“My brother’s Eagle, my grandpa and his brother are Eagle, my great grandfather, had he not been called off to go to World War II, would have gotten his Eagle,” Gabby Mayrend said.

On Sunday, the Scouts hosted an online ceremony to welcome the new group of female role models.

“Eagle Scout is so much more than a medal or an award. It’s an expectation and a lifestyle. It means that you’re a role model to your community every day of your life. Once an Eagle, always an Eagle,” said Lyndsey Nedrow, who earned the rank with her sister, Lauren.

“Everyone that’s in Scouts has a little bit of ‘I want to change the world’ in them,” said Lauren Nedrow. 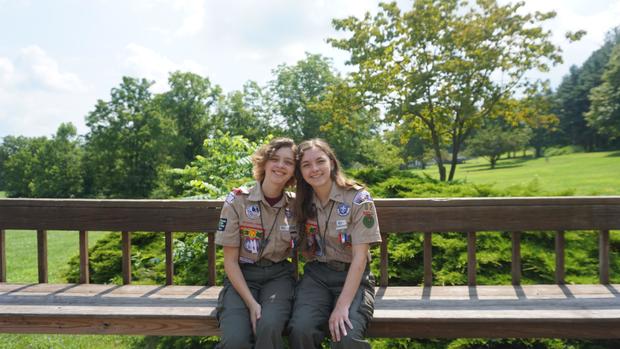