That’s how friends remembered Yankees legend Whitey Ford on Friday, after “The Chairman Of The Board,’’ who had been following the club’s ALDS run, died Thursday night at his Long Island home.

Ford, 91, seemingly had a smile and story for everyone he met and a lot of the tales included his running partners, Mickey Mantle and Billy Martin, in a long gone era of New York baseball.

“There are a couple of guys waiting in heaven right now with a drink in their hands. Chairman of the Board, what a class act all the way to the end,’’ Billy Martin Jr. said Thursday from Arlington, Texas, about Mantle and his father. “The first call I got was from Danny Mantle.’’

(From left) Whitey Ford, Mickey Mantle and Billy Martin in 1955.

Former Yankee Whitey Ford is introduced during the 64th annual Old-Timers’ Day pre-game ceremonies prior to the New York Yankees hosting the Tampa Bay Rays on July 17, 2010 at Yankee Stadium in the Bronx.

Whitey Ford with Yogi Berra before game 4 of the 1999 World Series between the New York Yankees and the Atlanta Braves at Yankee Stadium in New York, NY.

Yogi Berra and Whitey Ford sit in the golf cart they were brought out in for introductions in the Old Timers Ceremony before a baseball game at Yankee Stadium in 2013.

Whitey Ford during the New York Yankees 72nd Old Timers Day game before the Yankees play against the Tampa Bay Rays at Yankee Stadium on June 17, 2018.

Pitcher Whitey Ford #16 of the New York Yankees warms up prior to a game in 1956 against the Baltimore Orioles at Yankee Stadium in New York, New York.

Pitcher Whitey Ford #16 of the New York Yankees pitches in 1963.

New York Yankees pitcher Whitey Ford throws during the 6th game of the World Series against the Pittsburgh Pirates in Pittsburgh on Oct. 12, 1960.

Mickey Mantle, left, and Whitey Ford, both formerly of the New York Yankees, smile as they are inducted into the Baseball Hall of Fame on January 16, 1974.

(From left) Hank Bauer, Gerry Coleman, Whitey Ford and manager Casey Stengel after the first game of the 1957 Word Series.

Four Yankees, who played a key role in the 4-2 triumph over the Orioles, are all smiles in dressing room. They are (from left) Hector Lopez, Whitey Ford, Bobby Shantz and Roger Maris on September 18, 1960.

Whitey Ford #16 of the New York Yankees addresses the media after a MLB game in the Bronx, New York in 1961. 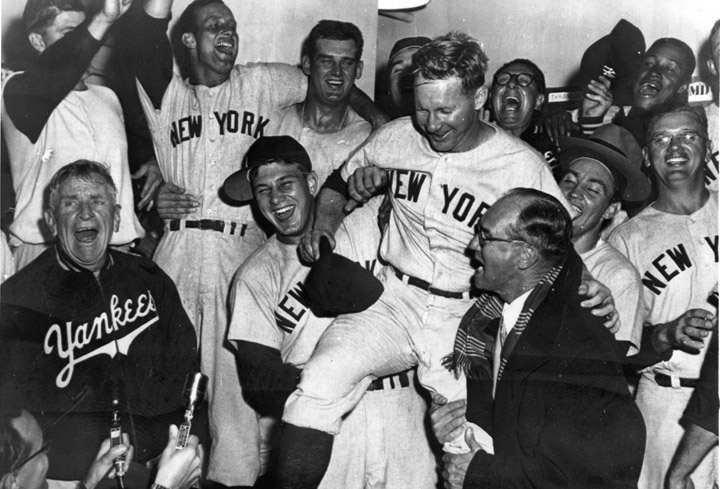 Whitey Ford is hoisted on Yankees’ shoulders after pitching them to the AL pennant in 1955.

Whitey Ford gets congratulated by Joe DiMaggio, left, and Gene Woodling in 1950 after a six-hit shutout propelled the Yankees into first place.

The plaque of Whitey Ford is seen in Monument Park at Yankee Stadium prior to game between the New York Yankees and the Chicago White Sox on May 2, 2010 in the Bronx.

The Post’s Drew Loftis evaluates all the relevant fantasy football…

For all of Ford’s accomplishments, Stump Merrill remembers that no task was too small for Ford when he was an instructor during spring training while Merrill was the Yankees’ manager in 1990-91.

“He threw batting practice like everyone else and was just like Catfish [Hunter]. He would throw batting practice from the rubber and he would back up behind the screen getting balls from the outfield,’’ said Merrill, whose voice cracked when told by The Post that Ford died.

Talking from his Maine home, Merrill shared the giving side of Ford.

“He had an apartment in Fort Lauderdale that he always rented to either the manager or a coach for the Fort Lauderdale club in the Florida State League,’’ Merrill said. “That was his way of taking care of that person because he had two kids at home and so on and so forth and didn’t have enough money. You put him in the same class as Yogi. No enemies, nobody said a bad word about him. Do anything in the world for you.’’

“Absolute sweetheart, a genuine person,’’ said Jackson, who savored the Hall of Fame weekends when Ford would kid Jackson that he would have been a fourth outfielder on the Ford-Mantle-Berra Yankees.

Hall of Fame reliever Goose Gossage was a pitcher with the Yankees when Ford was a spring training instructor in Fort Lauderdale.

“Whitey used to run our workouts on the back fields and as soon as Billy [Martin] and everybody was on the bus to the game, Whitey would go, ‘OK, go golfing,’ ” Gossage recalled from his home in Colorado. “It was great. We got our work in and he was a joy to be around.’’

Recalled Joe Torre: “He was a jokester. Him and Yogi, they would be on the bench together and they would loosen up our dugout getting ready to throw the first pitch. It was special. Whitey was everything you hoped he would be.”

Ron Guidry grew up idolizing Sandy Koufax and Ford and understood the latter was more than simply a Yankees pitcher.

“He wasn’t just another New York pitcher in Yankees annals,’’ Guidry said. “He was Whitey Ford, Chairman of the Board. It’s tough to lose him.”

“Whitey’s name and accomplishments are forever stitched into the fabric of baseball’s rich history. He was a treasure, and one of the greatest of Yankees to ever wear the pinstripes. Beyond the accolades that earned him his rightful spot within the walls of the Hall of Fame, in so many ways he encapsulated the spirit of the Yankees teams he played for and represented for nearly two decades,” said Yankees managing general partner Hal Steinbrenner.

“Whitey was New York tough. When you couple that with his dedicated service to our country, a deep love for the only team he ever played for, six World Championships, and a genuine personality and charisma that showed throughout his life, it’s no wonder he endeared himself as a legend to generations of Yankees fans everywhere.

“While there is comfort knowing Whitey was surrounded by his family at the time of his passing while watching his favorite team compete, this is a tremendous loss to the Yankees and the baseball community. We have lost our ‘Chairman of the Board,’ and we extend our deepest condolences to the entire Ford family.”