Whitey Ford, the street-smart New Yorker who had the best winning percentage of any pitcher in the 20th century and helped the Yankees become baseball’s perennial champions in the 1950s and ’60s, has died, the team announced on Friday. He was 91.

“A 6x WS Champion and 10x All-Star, The Chairman of the Board was one of the best lefties to ever toe the rubber,” the Yankees said on Twitter. “He will be deeply missed.”

The Yankees are incredibly saddened to learn of the passing of Hall of Famer Whitey Ford. Whitey spent his entire 16-year career as a Yankee. A 6x WS Champion and 10x All-Star, The Chairman of the Board was one of the best lefties to ever toe the rubber. He will be deeply missed. pic.twitter.com/2KDi4V9SeA

A family member told The Associated Press on Friday that Ford died at his Long Island home Thursday night. The cause was not known.

Nicknamed the “Chairman of the Board,” Ford was a wily left-hander who pitched from 1950-67 in the major leagues, all with the Yankees. He was among the most dependable pitchers in baseball history.

He won 236 games and lost just 106, a winning percentage of .690. He would help symbolize the almost machinelike efficiency of the Yankees in the mid-20th century, when only twice between Ford’s rookie year and 1964 did they fail to make the postseason.

Whitey Ford of the New York Yankees as he pitched a five-hitter against the Chicago White Sox for his 13th victory of the year, July 4, 1963, in the first game of a doubleheader, in New York. John Lindsay / AP

Ford’s death is the latest this year of a number of baseball greats: Al Kaline, Tom Seaver, Lou Brock and Bob Gibson.

Ford was in his mid-20s when he became the go-to guy in manager Casey Stengel’s rotation, the pitcher Stengel said he would always turn to if he absolutely needed to win one game. Ford was Stengel’s choice to pitch World Series openers eight times, another record.

Ford’s best seasons came in 1961 and 1963, in the midst of a stretch of five straight AL pennants for the Yankees, when new manager Ralph Houk began using a 4-man rotation instead of 5. Ford led the league in victories with 25 in 1961, won the Cy Young Award and was the World Series MVP after winning two more games against Cincinnati. In 1963, he went 24-7, again leading the league in wins. Eight of his victories that season came in June.

Ford did have his World Series disappointments. He spoke bitterly of the 1960 championship, when he shut out Pittsburgh twice but was used by Stengel in Game 3 and Game 6 and so was unavailable for the finale, won 10-9 by the Pirates after a Bill Mazeroski home run in the bottom of the ninth. In 1963, Ford was outmatched twice by Sandy Koufax as the Los Angeles Dodgers swept the Yankees.

Unlike Koufax, Ford was not an overpowering pitcher. Instead he depended on guile and guts, rarely giving hitters the same look on consecutive pitches. He’d throw overhand sometimes, three-quarters other times, mixing curves and sliders in with his fastball and changeup. To catcher Elston Howard, Ford was the “Chairman of the Board,” a nickname that fit Ford’s role at the top of the Yankees’ pitching staff. 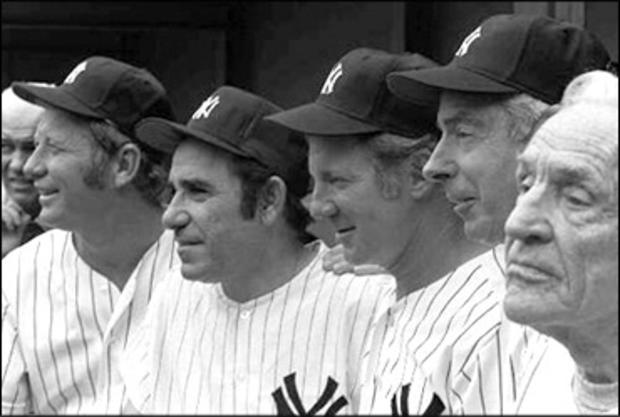 Ford would also acknowledge using some special methods to add movement to his pitches, including saliva, mud and dirt and cutting the ball with a ring.

“If there are some pitchers doing it and getting away with it, that’s fine by me,” Ford told sports writer Phil Pepe, in 1987. “If it were me and I needed to cheat to be able to throw the good stuff that would keep me in the major leagues at a salary of about $800,000 a year, I’d do whatever I had to do.”

After his retirement, Ford briefly worked as a broadcaster and opened a restaurant in Garden City, “Whitey Ford’s Cafe,” that closed within a year. In 2001, actor Anthony Michael Hall played Ford in the Billy Crystal-directed HBO movie “61(asterisk),” about the 1961 season and the quest of Mickey Mantle and Roger Maris to break Babe Ruth’s single-year home run record.

Ford and Mantle were cultural opposites, an odd couple who became inseparable off the field, Ford the fast-talking city kid, Mantle the shy country boy from Oklahoma. They enjoyed the attraction of New York nightlife along with rowdy, wise-cracking infielder Billy Martin and Stengel called the trio “whiskey slick.” Mantle shortened that to just “Slick” for Ford, who proudly used the nickname as the title of his 1987 autobiography, co-written by Pepe. (Ford in turn would coin one of baseball’s most famous nicknames, “Charlie Hustle,” for Pete Rose).

Typical of their adventures was an episode during a trip to Japan where they hooked up with a 400-pound sumo wrestler, who was accompanied by a translator. Through the evening, the wrestler never spoke, just smiling and nodding.

Then it occurred to Martin that it might be fun to sling some insults at the wrestler. Their new friend continued to nod and smile. Then, when the evening was over Martin said good night in Japanese and the wrestler nodded and said, “Thank you very much for a nice evening,” in perfect English.

It was a lesson in international diplomacy.

After Martin was traded in the aftermath of a 1957 brawl at the Copacabana night club, Ford and Mantle remained centerpieces in the Yankees dynasty and were elected together to the Hall of Fame in 1974.

Ford often called his election the highlight of his career, made more meaningful because he was inducted with Mantle, who died in 1995.

“It never was anything I imagined was possible or anything I dared dream about when I was a kid growing up on the sidewalks of New York,” he wrote in his autobiography. “I never really thought I would make it as a kid because I always was too small.”

Edward Charles Ford was born on the East Side of Manhattan, about 100 blocks south of Yankee Stadium. He grew up playing sandlot ball in Astoria, Queens, a section of the city that produced major leaguers Sam Mele and Tony Cuccinello and singer Tony Bennett. The blond-haired Ford was nicknamed “Whitey” while still in the minor leagues.

The Yankees signed Ford in 1947 and three years later he was called up in midseason. At just 5-foot-10 and 180 pounds, Ford was viewed as a marginal prospect. But he won nine straight games and nailed down the 1950 World Series sweep of Philadelphia by winning the fourth game, coming within one out of a complete game.

After two years away for military service during the Korean War, Ford returned to the Yankees in 1953 and, along with Mantle became the core of a team that won 10 American League pennants and five World Series in the next 12 years. Ford won 18 games in his first season back and never won fewer than 11 for 13 straight seasons.

Mantle summed it up: “He was the best pitcher I ever saw and the greatest competitor. Whitey won seven out of every 10 decisions and nobody in the history of baseball has ever done better than that.”

China's young billionaires are riding the tech boom. Here are the...

China's young billionaires are riding the tech boom. Here are the...