The cause of death was not announced.

“It is with great sadness that I announce the death of my wonderful Mother In-law, Roberta McCain,” Cindy McCain tweeted. “I couldn’t have asked for a better role model or a better friend. She joins her husband Jack, her son John and daughter Sandy.”

Roberta didn’t often speak to reporters during the 2008 election, but she traveled with her son’s campaign and talked with staffers and volunteers on the road. In a joint interview with John and Roberta McCain in 2008, “CBS Evening News” anchor Katie Couric asked John McCain if he had ever told her to be quiet. Roberta retorted, “It won’t do him any good.” 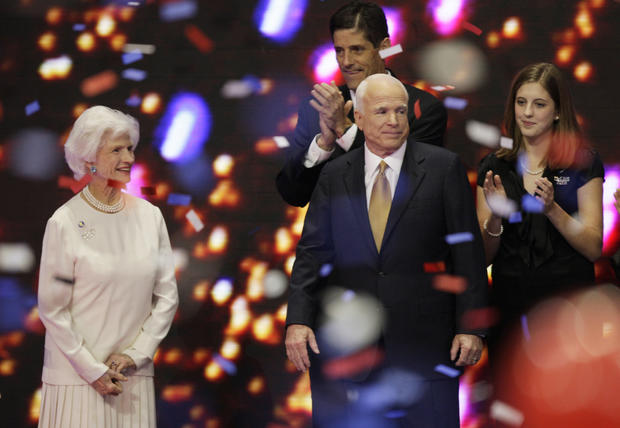 Born Roberta Wright on February 7, 1912, she was a student at the University of Southern California when she met a young Navy officer, John “Jack” McCain Jr., who would go on to become a four-star admiral. The daughter of an oil tycoon, her family disapproved of the match, and so they eloped in Tijuana over a bar called Caesar’s.

“A sailor has a girl in every port. I think she heard that,” she said of her mother’s reaction to her marriage to John McCain’s father.

Sandy Morgan sister to Sen John S McCain passed those morning. There are together again. pic.twitter.com/QTt4Oup4nQ

Roberta helped foster her husband’s successful career and their Washington D.C. home was famous for its parties.

In 1967, she and her husband were in London when they learned John, a Navy pilot serving in the Vietnam War, had been shot down over Hanoi. She said in a 2008 interview with C-SPAN that she was sure he had died. “Reality is reality,” she said.

But he was alive, captured as a prisoner of war. He was held for five-and-a-half years, enduring brutal treatment and torture, and even spending two years in solitary confinement. The North Vietnamese tried to exploit his status as the son of a prominent admiral, offering him early release, but he refused.

John McCain limped off the plane that returned him to the U.S. gripping a handrail and with hair that had turned white, according to a New York Times report from 1973 on his release. The injuries he sustained would affect his mobility for the rest of his life.

In a letter to President Johnson a week after John was captured, Roberta McCain wrote “as the parent of a son who was shot down in Hanoi last week and is now a prisoner of war, I wonder if you are interested to know that both my husband and I back you and your policies 100 percent in Vietnam,” according to The Washington Post.

After her husband’s death in 1981, Roberta and her twin sister, who died in 2011, spent months of every year traveling the world. In 2006 while in France, she was told she was too old to rent a car. So she bought one instead. She and her sister maintained a gin rummy game while on the road that went on for years. “We never settle up,” she told People.

John McCain told “CBS Evening News” in 2008 that “there’s hardly a museum or a church in Europe that she doesn’t know or hasn’t visited. And I mean it. She has really enriched her life by studying, reading and travel. And I’m proud. And she still does it.”

Roberta countered “do you want me to sit around and play bridge every day? Or discuss my last knee replacement? Or pass around pictures of my grandchildren? Well, that isn’t my choice of a way to live. I love to. That’s one reason I live in Washington is art museums are open seven days a week, and they’re all free, and you can’t say that about another city in the world.”

In a a statement after Roberta McCain’s death, Cindy McCain said “John credited Roberta with giving him his resilience in adversity and his joy in living.” At the age of 106, Roberta McCain attended her son’s funeral in the Capitol in 2018.

In an interview with Vogue in 2008, Roberta said “Honey, I’ve had a dream life, and it was all luck.” 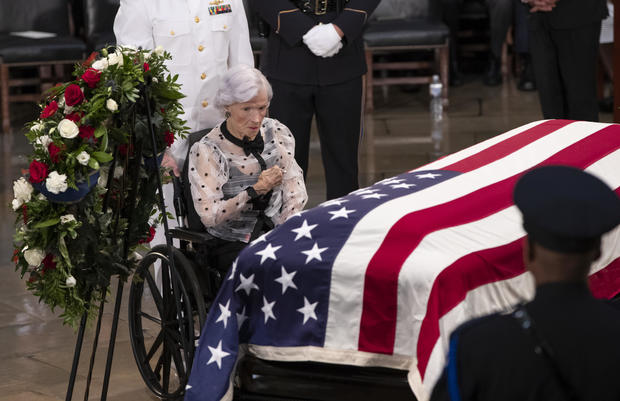 In this August 31, 2018, file photo, Roberta McCain, the mother of Senator John McCain of Arizona, stops at his flag-draped casket in the U.S. Capitol rotunda during a farewell ceremony in Washington J. Scott Applewhite / AP

Philippines orders evacuation as the strongest typhoon of 2020 approaches

Philippines orders evacuation as the strongest typhoon of 2020 approaches